-- WARNING ! Real message of support ! --
Richard Armitage sent a Birthday message on 25th of August, 2011 to thank his fans for all the presents, work and efforts they undertook for his 40th birthday.

What better way, than to publish this message at the ending of our 'birthday-present, the King Richard Week in support of Mr. Armitage's "Richard III" filming project.
(If I could figure out how to link to the message, I would only put a link here, but as I can't, here follows the full text of the message, published on RichardArmitageOnline.com):

I would like to take this opportunity to say a huge thank you for all the kind gifts which have been sent to me over the last few weeks, for my birthday; so many gifts, cards and emails of good wishes from all over the world. (Poland, Ukraine, Japan, Russia, Germany, Korea, Itlay, USA, Canada, Netherlands and all over the UK)

I will be so 'well read', drunk, fat, warm and sweet smelling thanks to your generosity.

I am particularly excited to let you know that the "Just Giving" donations to our four charities has reached an amazing £11,933! In addition to donations to Oxfam and Christchurch Earthquake appeal, which I find both thoughtful and moving.

I am afraid there may be some delay in remitting thank you letters and any requests for signing photos, as I am in New Zealand for the rest of the year, but am working on a system to remedy this.

So middle age has arrived and apparently 'life now begins'. I look forward to the next chapter, there is nowhere I would rather be at this moment than exploring "Middle Earth" with my new family of Dwarves, Elves, Men, Wizard and Hobbit. What a gift to be here, in this place, at this time. I can't wait to share it with everyone. I am a very fortunate man.

Good things must end, but not for us. The KingRichardArmitage website continues and some posts planned for the week are still on their way to come in. As always, pre-planning is good, life is different, so not all our plans for the week worked as planned. Personal reasons, illnesses and family obligations interfered.

We, the openly visible contributors and the silent one's not able to contribute during the week, hope, you have enjoyed the week and will follow the articles still to come. Updates will remain to be published on the KingRichardWeek 2011 - page.

King Richard Week - Was Richard III a Villain or a Saint? Judge for yourself ...

The Trial of King Richard III

Not all research results remain true till in our days or in some points new evidence has been added by researchers, but still this court of justice is an extensive presentation of material, research and a very British way to cope with the possible guilt of a long dead English king.

Introduction by Prince Richard, Duke of Gloucester, the successor in the position, King Richard III held before ascending to the throne of England. A modern trial is held at the Old Bailey in London, discussing and passing sentence. All accusations against King Richard III are brought to the light and dissected and examined in detail. (21st February, 1984)

I will not reveal the verdict, as I do not want to spoil the ending for you.

(The embedded video shows the first part. The following parts will appear or even will continue to play automatically, as they are connected in a playlist created by valentinejay.)


Please don't forget to sign the petition for "Richard III":

King Richard Week - Was he a Good or Bad King?

-- WARNING ! Historic content presented in a lighthearted way --
A podcast about King Richard III, evaluating his time as King of England

Please don't forget to sign the petition for "Richard III":

Richard III in a Historical Documentation (Channel 5 - Kings and Queens)

-- WARNING ! Historical content easy to digest without prior knowledge of King Richard III ! --
The following film sequences cannot be embedded, therefore I place the links to the YouTube videos here:

The presentation is a bit sensational because, as Shakespeare showed us, a mysterious bad king sells better to the masses than a good one.


Please don't forget to sign the petition for "Richard III":

Please don't forget to sign the petition for "Richard III" !

As I am greatly involved with the KingRichardArmitage page, my blog suffers currently from neglect.

But for those of you interested in King Richard III and his connection to Richard Armitage, give the event a try and read the stories which vary from historical topics to fan-funny ;o)

For those interested in history and the background of King Richard III, I will post material here, which presents the whole topic in a lighthearted way. Heavily historical content will be posted with a special warning ;o)
I hope that is fair to you fellow Richard Armitage fans ;o)

For those of you absolutely not interested in King Richard III, not even the 'funny stuff' about him, please skip this weeks posts. I will come back to our "Intrigue" again afterwards, though after all the work and night shifts at the computer lately, I urgently need some rest and hopefully will get some HOLIDAYs soon.


Concerning the announced Donation for signatures of the Richard III-petition till the 22nd of August, 2011:
The number of online signatures is in and, including unconfirmed signatures, amounts to:
€ 14,40
As we expect further signatures, which having been collected at signings at the weekend, the final amount is still unclear and will be announced in the end post of the King Richard Week on the website on 28th of August, 2011.

As the donor is doing honorary work for the U.K. where especially children are profiting, he decided, to be fair and split his donations between the Salvation Army and the Shelter. (He will add a further donation to the reached amount.)


I hope you will enjoy the contributions about King Richard III!

This Birthday video made for Richard Armitage, was originally created for the birthday one year ago, but what better way to celebrate him, now far away from his hometown, with impressions from London and with lots of fireworks ;o)

I hope, Richard Armitage finds a quiet and nice place to celebrate his birthday and does not have to run from his fans ;o)
I also wish that he gets an immense birthday cake (not only a digital one) which he can enjoy at leisure:

and has time to discover all the diverse birthday presents, fan-book (by Calexora), collected greetings (e.g. from RichardArmitageNet.com) and our 'digital' one: 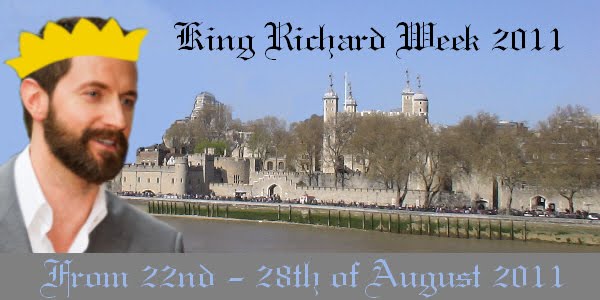 will start on Monday, 22nd of August, 2011 with contributions of diverse participating blogs.
(Click on the picture to get to the event page):

One week of festivities around the 40th Birthday of Mr. Armitage and the event which lead to his name 'Richard', the Battle of Bosworth in 1485. 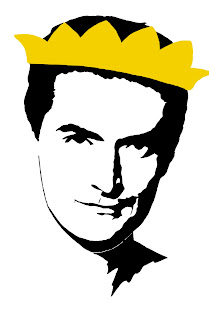 Enjoy the King Richard Week 2011 and have fun!

We Have a Donor for the Richard III-Petition - Please Sign Now !!!

We have an 'anonymous' donor who will pay € 0,10 (about US$ 0,14; Donor is from Europe) for one of RA's charitable causes (or divided among them, depending on the final amount) for each signature to the petition made till Mr. Armitage's birthday on August 22nd, 2011!

So if you have uncles, aunts, sisters, brothers, cousins, second cousins, mere acquaintances you can mobilize, do so now and make them sign the petition !!!

Go to the petition here:

I am still among the living ...

I know you will say, now that I have met Al Delarmy in Hamburg, I am not likely to share the spicy details with you.
But you are far from the truth!

Al is back in his story, feverishly preparing the plot and I must admit, another guy had my whole attention lately.
This guy:


Compared to a King, Al Delarmy had to move to second place and must wait for a bit longer. Al holds a big chunk of my heart, so he is not forgotten and "Intrigue" will continue. ;o)

But now that it is August, as Servetus so aptly calls it "Happy Birthday month Richard Armitage", my work goes into supporting Richard Armitage and his project "Richard III".
If you have not signed the petition, please give your heart a slight push and do so now. From the feedback we got so far we can tell that our help with the petition is much appreciated!!!
(You can directly reach the petition by clicking on one of the pictures in this post.)