... only this time, there are three roses involved.
Should this tell us somehow, that there is a freemasons' conspiracy behind this all?

Even "Spooks" visually brought in the topic in connection to politics, by placing the Home Secretary William Towers (= Simon Russell Beale) in front of a freemasons window with different significant symbols. 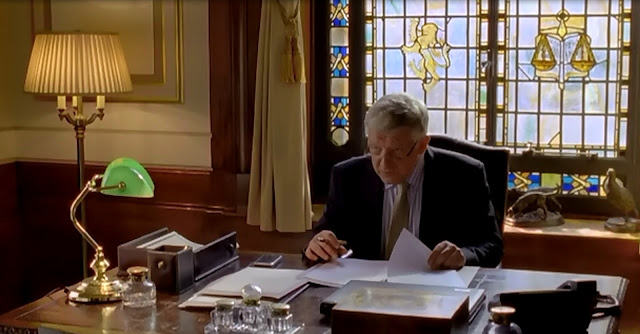 York for sure is the white rose,
Leicester might take over the red rose from Lancaster, as it is where the victor placed King Richard III,
but what colour would the third rose have?

If we follow the freemasons symbolism, it has to be a pink rose.

The underlying symbolism behind the three roses:

White = The beginning, the birth, the start into life, the purity, the innocence
Pink = the life itself, its joys, as well as worries and burdens, the mixture of light and darkness in reality
Red = the death, the ending, the resolution to it all, the fulfillment

These are only a few of the potential readings of these symbols, but I don't want to give you a lecture about the freemasons roses, but about the new War of the Roses.

In a poll on KRA you now can chose freely where you would see the fitting resting place for King Richard III. As supporters of King Richard III, we have discovered our king long before politicians and the marketing departments of the tourism industry.

Read more about the positive and negative aspects of each location and the background of the poll on KRA.

Only the best place for King Richard !


P.S.: My opinion on a state funeral. He has endured so much already, he will bear this with good grace as well ;o)

Laboratories and Their Historical Reliability


The last week(s) were a wonderful row of discoveries.
For me, though lots of work tried to overthrow me, this time was phenomenally interesting.


For me Philippa Langley, the major force behind the whole developments around King Richard III, brought back a strong optimism with her message:

Believe in your dreams!

Now it is up to laboratories to prove, if the found human remains really belong to King Richard III.
But...

Has there always to be a 'but' for CDoart?

Yes, and even a large one,
as the laboratory can only research our expectations.

That means, expectations and research in two directions,

As it is, even if the laboratorial research would not prove the connection, I would not entirely see the possibility gone, that the found human remains still belong to King Richard III.
As a matter of fact, the female line in general is a very badly documented one, the more the research of Dr. Ashdown-Hill (interview on KRA here) is immensely impressive to me.
Females did not inherit the main estates or were seen as main heirs and so documentation except for marriages, often is quite scarce. Also, un-recorded adoptions of relatives' siblings were not uncommon, especially in the non-inheriting female line.
To gap 17 generations, a reliable female line can have various sources of disruption.

So in my view, it would be absolutely miraculous, if the laboratorial research would confirm the archaeological and historical indications.


Though the research of the mitochondrial DNA in general is technically a reliable one, there are enough factors which might cause errors, that I would not put my entire trust in it, should it result in no match. I see it more as one piece in a puzzle, not the whole solution of this already far grown picture.


Fitzg - Canada and King Richard III - Fitzg wonderfully describes her reactions and musings to yesterday's discoveries on the KingRichardArmitage website!