Poll - The Results ARE ... Surprising?

The poll from the final day of FanstRAvaganza has ended and the results are in: 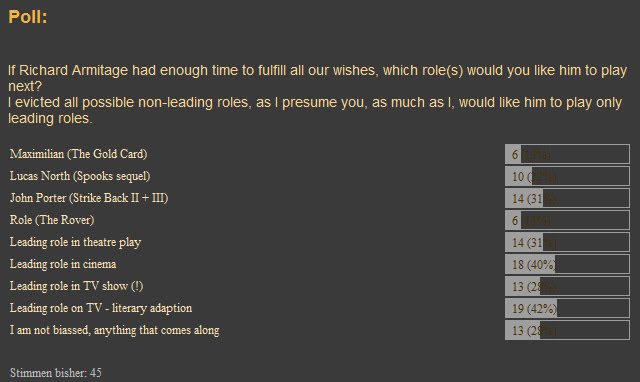 What really made me wonder was that "The Rover" had a slow start in this poll.
But understandable, as I like most fans from abroad would have a hard time to get to see it at all.

My Max did not hit the top three either ;o( No matter, I love Max (and my computer with the same name). I am glad that 5 merciful souls had pity with me and voted for him. (1 vote was my own ;o)

Top-three (four) winners of the poll are:

2. Cinema - leading role
"The Hobbit" by far is not leading enough. Come on, producers, get your wonderful scripts out and cast Richard Armitage. The fandom is waiting!

3. Strike Back II + III / Theater production
The third place two options have to share, as they received the same amount of votes. In their kind they are quite different and compared to "The Rover", who had a slow start, at least for me the high result of the theater production was surprising.

The fourth place also is quite interesting. Once again, two options share the same number of votes: Leading role in TV-show (!) / Anything that comes along
For the TV-shows I can only recommend the FanstRAvaganza article by Traxy. I have not seen any of those shows and without a TV set only know some by name. I know that some or most of them have a German copy, which mostly is much worse than the original. So you see, I am biassed and not a reliable source to judge this point.
But on the other hand, the other option once again shows that Richard Armitage has an exceptionally loyal fanbase and he really does not have to worry which roles he choses.
At least most of us will follow, as long as he is happy with the choice.

One last point I must draw out of this poll is, that 10 voters (I must admit, I am among them) believe, Lucas North / John Bateman is not dead after "Spooks 9".
That is really a good result!

Thank you for taking the time to visit and vote! I hope you had fun with the choices and the result.
Posted by CDoart at 01:40