Yup, there's more!
• In freeform: Melanie on why Harry Kennedy is the perfect man
• Itsjsforme unveils Guy of Gisborne's latest public service announcements (not safe for work!)
• In fandom, Fabo on Richard Armitage's statements about fans
• Gratiana Lovelace requests help captioning in "I'm Too Sexy for My T-Shirt!"
• The Hobbit chain goes creative with The Queen on Hobbit quilts
• Mrs. E.B. Darcy on Hobbit action figures!
• For King Richard Armitage, IngeD3 reviews the Michael Hicks biography of the fifteenth-century king
• In fanfic, John Thornton on why he loves Margaret Hale
• Jo Ann introduces us to a new Armitage character she knows we'll love

History & Fantasy from general perception are some entirely different concepts of coping with and seeing the truth.
A historian, confronted with the opinion that what he does ultimately is 'fiction', might get a bit miffed, but is the separation between history and fiction really so easy to determine?

Fantasy is a way of creating and interpreting one’s environment and all that happens and is around oneself. We use a considerable amount of fantasy to get along in our present time.
You don’t believe me?
So ask two eyewitnesses who attended one and the same event to describe it to you. To make it the more interesting, they should leave out hard facts like the location's address, exact time and names of other attendees. Now, you will recognize, it starts to get really interesting, as for quite a while into their description, you will have difficulties determining, if they indeed attended one and the same event. Each one sees different things, notices different things and finds other things important as well as comes to his own conclusions what the whole event was about or why he went there.
This is exactly the same with history. The one who tells the 'story' defines its outcome and selection, as well as its interpretation.

To re-create history, a present time long gone, to some extent also necessitates an amount of ‘fantasy’.
To ‘create’ a functioning environment, where mostly large parts can no longer be proved by the remains from that time, a large quantity of fantasy is necessary to fill the gaps.
Modern research by far gave us close and detailed insight in what people ate, what they did or where they lived.
But for example, we have no resemblance of knowledge of how they danced, how their music sounded in the late Middle Ages or what they cooked. From the remains of food which were found and the very fragmentary cookbooks remaining, exact measurements are scarce and the ingredients mentioned were well beyond the reach of normal folk.
So we need to engage our fantasy, to awaken this time in our mind and fill the gaps, historical research cannot fill.
For example, some 20 years ago, I read a historical research stating, that at the court in London a normal courtier in the late Middle Ages drank 5 litres of wine daily. I needed quite some fantasy to come to terms with that statement ;o)

The love for fantasy books, Mr. Armitage mentioned to have, might well have been the exact point to awaken his interest in history, literature, the enactment of history in theatre and film and furthermore to bring King Richard III to our present time in a film adaption. (You see, I just can't refrain from coming back to my favourite topic ;o)

But when we are already there, as a result of fantasy and history mingling together, I must ask the question:
Are Thorin Oakenshield and King Richard III so much different? – And that leads further to the results of the long going poll on the KingRichardArmitage website:

Comparing the two characters:
King Richard III
- was real
- ended tragically
- was just and idealistic during his lifetime
- was a fierce fighter and good warrior
- married his early love, Anne Neville
- lots of brothers and a conspiring and ‘intriguing’ family. But after the death of King Edward IV the last living male child of Richard, Duke of York and Cecily Neville and so
- the last keeper of his father's legacy

Though their life is not entirely comparable, they share quite some similar aspects.

The participants of the poll seemed to agree with me, as all the options in the poll got results: 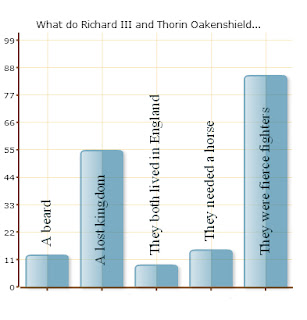 13 participants voted for beard (I will come back to the beard-topic in my Friday-FanstRAvaganza post, so won't say more for now.)
55 for lost kingdom - And indeed, both lost their hard fought for kingdom with their [Spoiler-Alarm for "The Hobbit"] death.
What I found especially interesting, and what brings back my initial topic of Fantasy and History not being so far separable,
9 participants voted for "They both lived in England".
The research mostly declines nowadays that King Richard III wanted a horse, so the next one is a bit hard to answer definitively. But
15 participants would give both, Thorin Oakenshield and King Richard III, a horse. I find that very kind of them!
The majority was convinced both were fierce fighters. One now gets a two part film, hopefully the other will follow shortly ;o)
85 votes and so the clear winner of the poll.

Thorin Oakenshield & King Richard III - fierce fighters
So their similarity and the connection between Fantasy & History is proven at last!


Have a nice and funny FanstRAvaganza 3 Week !


<< Tomorrow's post will discuss "Richard Armitage & Women" and somewhat uses the results of the first two articles to search for conclusions. - Please note the plural in 'women'! >>


I don't need to mention who made this wonderful banner and you will know anyway ;o)